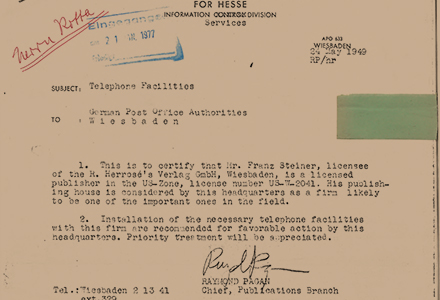 From Leipzig to Stuttgart

Our publishing house’s history is closely interwoven with Germany’s post-war history. From Leipzig, it migrated to the American occupation zone in Wiesbaden, where the publishing house was officially founded and given its name in 1949. In the 1980s, the journey continued to Stuttgart, but for further reading …

In 1892 Franz Steiner was born the son of a print shop owner in Graefenhainichen near Leipzig, Germany. After an apprenticeship as a typesetter, he took over the management of his father’s business, which was expanded with a second print shop in 1927. Early on, Steiner began to specialise in the highly demanding field of scholarly typesetting, focusing particularly on old and rare foreign languages and Middle Eastern works. As a result of this he was able to build up close ties to both the Deutsche Morgenlaendische Gesellschaft (German Oriental Society) and the Prussian Academy of Sciences between the two world wars, connections which would later stand him in good stead.

Although Steiner’s businesses survived the Second World War undamaged, he decided to leave the Soviet occupation zone and, at over 50 years of age, start over again in West Germany. He was supported in this by the American military government, which had already organised the westward move of several leading publishers before withdrawing from Leipzig. Thus, in 1946 Franz Steiner was once again able to open an academic printing house, the Wiesbadener Graphische Betriebe in Wiesbaden. Many of his old employees made the move with him.

In May 1949 Steiner received a license to found his own publishing company, which he named the Franz Steiner Verlag. At this point his old connections proved invaluable. Back in the 1930s Steiner had already become acquainted with Helmuth Scheel, director of both the Prussian Academy of Sciences and the Deutsche Morgenlaendische Gesellschaft (German Oriental Society). After the war, Scheel worked to re-establish both societies in Mainz and to help found the Akademie der Wissenschaften und der Literatur Mainz (Academy of Sciences and Literature, Mainz). In the same year that his new publishing house was founded, Franz Steiner was able to sign long-term contracts with both institutions, and from the very beginning he worked closely with the Notgemeinschaft der Deutschen Wissenschaft (Emergency Association of German Science), the precursor of today’s Deutsche Forschungsgemeinschaft (German Research Foundation). Among other things, he was able to purchase the West German licence for the first postwar edition of the German dictionary “Duden”, which had been published in Leipzig in 1947. The new publishing house quickly took root, and Franz Steiner became a central figure in the re-establishment of academic publishing in postwar Germany. Until his death in 1967, he remained in charge of the company, and his vision for the company’s thematic focus lives on to this day.

Four years after Franz Steiner’s death, his son Claus Steiner sold the firm to the Athenaeum publishing group of Harcourt, Brace & Jovanovich (New York) and left the company himself shortly thereafter. The “American years” were only a short interlude, however. In 1974 Karl Jost, who had joined the house as production manager back in 1953, oversaw the move to join the publishing group of the Deutscher Apotheker Verlag, where a nephew of Franz Steiner was one of the directors – and initiator of the negotiations.

When Karl Jost retired, Vincent Sieveking took the helm in 1977. Under his leadership the house moved in 1984 from Wiesbaden to Stuttgart, where the headquarters of the publishing group were based. There it remains to this day.

Vincent Sieveking, a Slavist and Anglicist by education, headed the publishing house for 24 years. During his term there, the house undertook a major expansion of their programme in the field of history. In addition to classical and ancient studies, new focus areas were established, including university history and the history of science, Eastern European studies, the history of medicine, as well as social and economic history. To this day, the series and journals in these areas remain a cornerstone of the reputation of the Franz Steiner Verlag as one of Germany’s leading specialist publishers in the humanities.

Since 2001, Thomas Schaber has headed the publishing house. Schaber holds a doctorate in political science and has built on the programme planning strategy of his predecessors while continuing to evolve the company’s traditional publishing focus – both in print and in e-publishing. He is consistently pursuing the internationalisation of the company by opening up new distribution channels, forms of marketing and cooperations.

Under the leadership of Thomas Schaber, the Franz Steiner Verlag has managed to establish its > eLibrary, a continually evolving electronic platform, which has been providing libraries and private users with access to its entire range of digital books and journals since 2014, as well as presenting the publisher’s open access range.

Our range of publications also continues to grow, through, for example, the development of new book series, such as the series launched in 2020 Transgressionen (Transgressions), Studien zur Uebersetzungsgeschichte (Studies on the History of Translation) and the Bibliothek der lateinischen Literatur der Spaetantike (Library of Latin Literature of Late Antiquity).